The population - in an ideal world you would ask everyone that meets the criteria for being included in the research i.e. the whole population (e.g. all 18 year olds in Middlesbrough)

The Sample - obtaining data from the whole population may be impractical or impossible so you need to consider looking at a sample, i.e. selecting only a certain amount (or subset) from that population.

There are different ways of sampling - see under Sampling and sampling errors on the Quantitative data collection page.

Statistics - are based on your sample data. They can be descriptive (i.e. just describing or summarizing what you found) or they can be used to make a prediction or estimate from the smaller group to a larger population (Statistical inference). In equations they are normally referred to by using roman characters e.g.

to represent the Mean of a sample

Parameters - refer to the whole population and tend to be referred to with Greek characters e.g

(Mu) which represents the Mean of the population.

This is the process of assigning or allocating the people in the sample to a specific condition.

Again it is important that the people assigned to each condition are representative of the sample.

Each person should be randomly allocated to a condition.

The validity of many statistical procedures is very often based on an assumption that the underlying population from which a sample is taken is normally distributed. These are parametric statistics.

Non-parametric statistical procedures do not rely on such assumptions about the shape or form from which your data was drawn.

This is a measure of the variability of the difference between a sample measure and a population measure.

It is calculated as the standard deviation of the difference between these two measures.

The higher the result the more spread out the data is (i.e.the more variable the data is).

Standard Error is the standard deviation of the population divided by the square root of the sample size.

This would be representative of the true population and they would be normally distributed. The Standard deviation of the Sample Means is also known as the Standard Error.

The confidence interval is a range of values where it is likely the true value of the population parameter lies.

You can make estimates for any level of confidence. Two that are most often used are:

There are 3 assumptions to make when using Confidence intervals:

The Confidence Interval is based on the Mean and Standard Deviation:

X is the mean

Z is the Z-value for the Confidence interval (i.e. 95% or 99%) - obtained from a normal distribution table (see below for an example)

s is the standard deviation of sample (if not too small)

n is the number of observations

The ± (plus or minus) indicates the margin of error 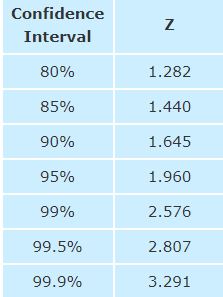 (Obtained from the Maths is Fun web-site)

The larger the sample size and the smaller the variability of the sample will produce a more accurate estimate.

Confidence Intervals can be represented graphically with hi-lo plots.

Sometimes you may be more interested in proportions rather than Means.

e.g. the proportion of teenagers who have been excluded from mainstream education.

To work out the proportion divide the number of instances you are interested in by the total number in your sample.

(to make it a percentage times this result by 100).

As is the case for sample means if we take repeated samples and find the proportion p of each of these samples then the mean of all these samples should approximate the population proportion.

The Z score allows you to estimate the chance of an outcome occurring.

Confidence intervals can be used when working with proportions to ascertain whether your sample proportion reflects what would be found in the population, however the calculation is different.

Out of 200 pensioners surveyed. 58 replied that they had retired when they expected to.

We can conclude with 95% confidence that the proportion of pensioners in the population who retired when expected would be between 0.2271 and 0.3529 i.e. between 23% and 35% of pensioners.